With our new Kjeldahl Labster lab (virtual lab), we did a small experimental study. We wanted to know how well students would perform in comparison to a demonstration in the lab (physical lab). Our hypothesis was that both groups would perform the same.

All the students were tested with the same moodle quiz.

The demonstration took up to 60 minutes in the physical lab. Although the data available to us is not entirely reliable[1], students, on average, spent 50 minutes playing through the virutal lab. 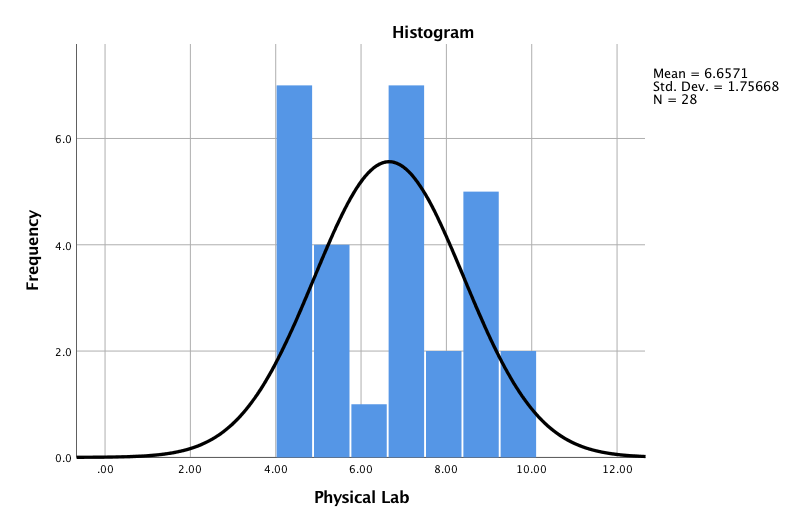 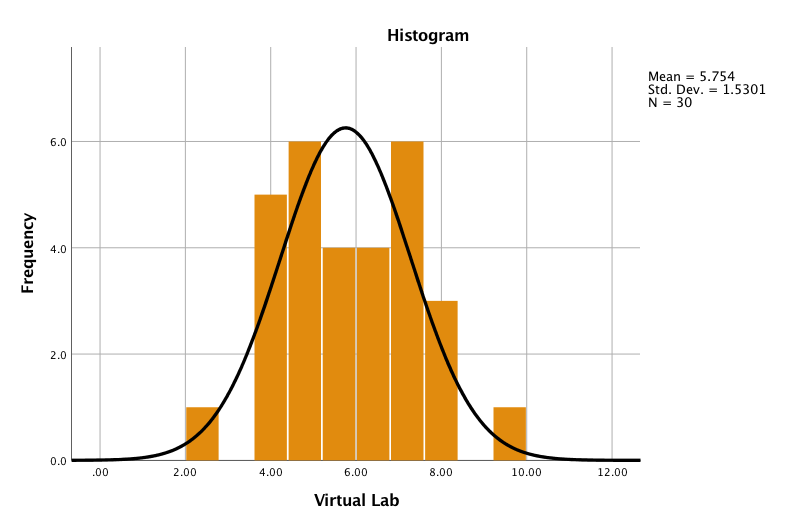 Comparison of the Groups

The difference in achievement is significant[3], and there is a medium effect size[4]. 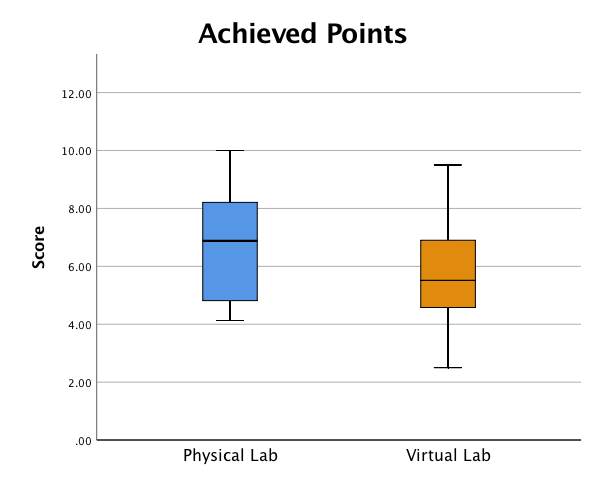 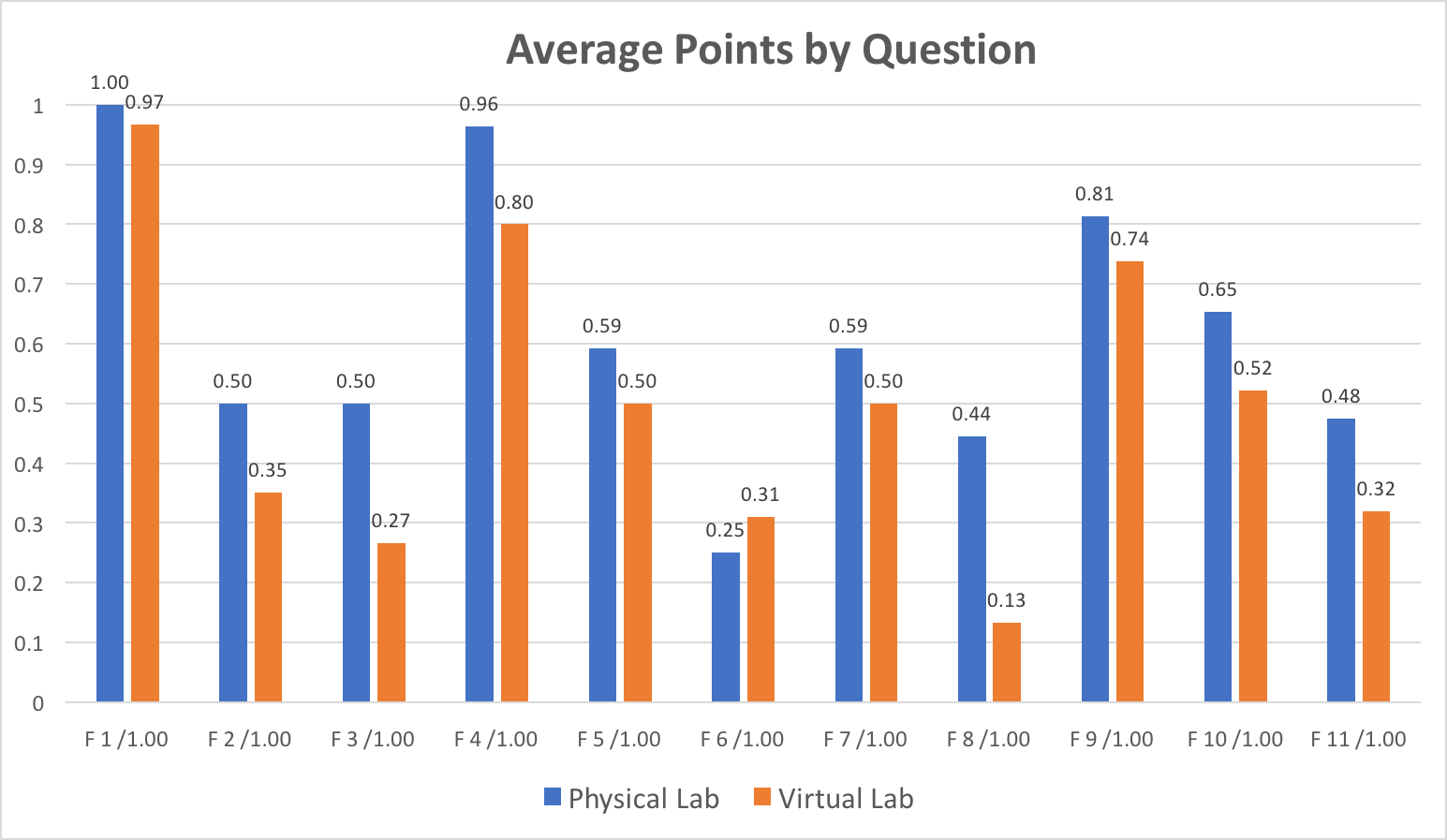 Most students (25) chose the third option instead of the fourth option, chosen by 22 students. This question may assess underlying logical thinking more than concepts about the Kjeldahl method, and the word ‘Gehalt’ may have been wrongly interpreted. Both reasons (logical thinking and the meaning of ‘Gehalt’ in this context) may explain the result but are, rightly so, expected of students. 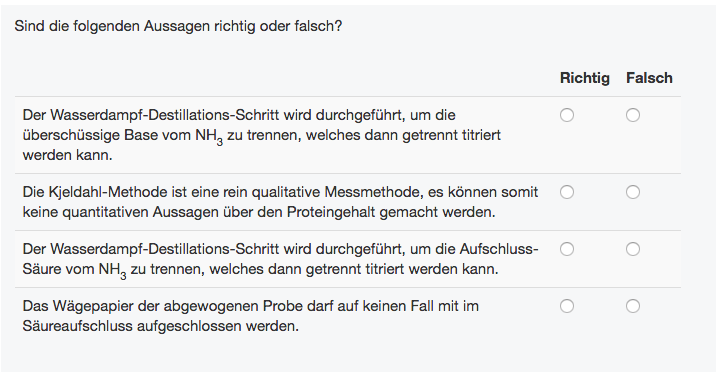 The pleasant result about question F8 is that 88% of the students correctly assessed the second statement. Why they didn’t manage to assess the fourth statement correctly –in the virtual lab the paper goes into the mixture without choice; there is a picture of the mixture where the paper is visible in a later question in the test– is a mystery to us.

The following question (F6) was better answered by the virtual lab group. 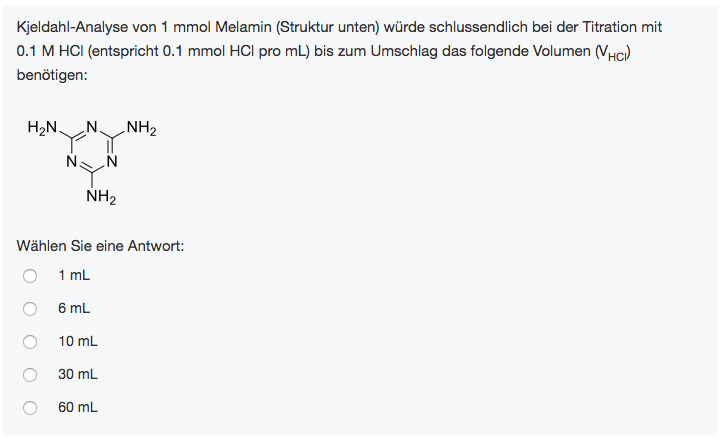 The reason for this result is clearly that there are more formulas and calculations (especially in the quiz questions) in the virtual lab than there were in the demonstration (physical lab). Additionally, maybe, it is more difficult to understand formulas and calculations if these are mostly only mentioned orally. In any case, both groups had difficulties. Only 9 students of the virtual lab group and 6 students from the physical lab group answered correctly.

Flaws in our study

The following points are flaws in our study and would have to be taken into consideration for a next study.

In this study, our hypothesis is proven wrong. There was a significant difference in the (conceptual) learning outcome between instruction in a physical or a virtual lab. Probable reasons for the difference of the groups’ results may well be explained by the possibility of asking questions during a physical lab (or being forced to be physically present), the ‘incentive’ flaw and the ‘congruence of content’ flaw mentioned above. If set up more appropriately, we believe the results would have been different.

The use of virtual labs is, despite the presented results, not at all a second rate teaching method and should be used when needed. Reasons to use virtual labs, of which there are many, are discussed in “Our First Success Story“. And, it is surely always better to use a virtual lab than no lab at all!

This study (and everything around it) would not have been possible without the indispensable help and profound knowledge of Dr. Melanie Erzinger and Dr. Samy Boulos.

PolyBooks: All around Labster (at ETHZ) Copyright © by Sarah Frédérickx. All Rights Reserved.